January 18, 2013
[Credit is due to my dear friend TLH for the word picture contained herein. It's all my writing, but I owe her for the visual that helped me find "my way" so to speak!] 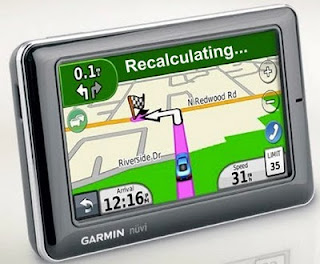 Have you ever been on a road trip in a city that you were not familiar with, and although relying heavily on your trusty GPS when you realize that you've made a turn just seconds before the GPS dialogue begins, "Recalculating...?" Honestly, I find that female voice slightly condescending as she points out what I've already realized. Duh! I know!

And yet, twenty minutes later, that same female voice warns me to bear left when the freeway forks ahead. That voice is calm and soothing when it guides me, welcoming and reassuring.
Life, it turns out, is much like a road trip equipped with GPS. The voice I hear, although sometimes it seems to be more of a whisper than the voice on my Garmin, is that of the Holy Spirit--God's Counselor. And sometimes, the busy-ness of life drowns out that voice in much the same way the engine, tire noise, radio, and conversation do my GPS.

It's at those times that I tend to make those "wrong turns". With my focus and attention on all these other things, I miss not only the voice but the text on the screen of my GPS (Psalm 119:105; I Samuel 3:1-11). And when I do, God is faithful to remind me:

I wish I could say that I found His warning that I'd gotten off track less irritating than Ms. Garmin, but I am simply not there in my relationship with Him. He knows me well--us, really, as humans. In Psalm 46:10, He points out the reality of my need: "Be still and know that I am God; I will be exalted among the nations, I will be exalted in the earth" (TNIV). Sometimes it requires that I be knocked off kilter for me to recognize that God knows the way far better than I; this realization always leaves me in awe of His guidance, protection, and provision in my life. And then I praise!

Last night, I received word that I had lost my internship, a requirement for graduation. Classes began last week, and although I knew that I was behind because I had not been able to begin this week there still remains a large difference between behind and impossible. This internship was applied for months ago, and required approval from the college as well as the organization. How on earth was I going to be able to find another site immediately?!?

The worst part of all is that I knew that I had made decisions that led them to second guess my intention. I bore responsibility for my actions. I stared at the words in the email over and over again,

"In thinking it over I think it would be best if you didn't do your internship here. It sounds like things are a little too uncertain in your life and I am afraid we cannot be flexible enough."

Even now, I want to argue with that statement. Uncertain?!? I feel like I've never been more certain in my life than I am right now. Doesn't uncertain mean irresponsible? Lacking commitment? Oh, the flurry of negative accusations that flood my mind! And like most "adult children", I reverted in that moment to my childhood and heard comments about being too much to care for, while on the other hand I wasn't quite enough to really matter. An intentional decision I'd made and did not regret appeared to be equal to making a wrong turn.

This morning, my dear friends who I had shared my raw emotions with had sent me kind and encouraging words. It was then that I was reminded that I had not failed. No, it was not failure or a character flaw that placed me in this position but the hand of God! For whatever reason, I am not supposed to be in that organization for my internship.

Today was a very long day as I waited for my online instructor to be in his office. I did not know what options I had at this point. I feared the worse--a failing grade, academic probation and postponement of graduation (not to mention loss of graduating with highest honors!).

The verdict...I can use my current ministry position for my internship so long as I have appropriate supervision! Whew! What a relief! And honestly, this is the best case scenario for me. I begin a third workshop for hoarders/creative clutterers in March on top of the other three groups I am facilitating, and I have three beautiful women who I help with clutter coaching as they take the workshop home and put it to use. I should not have ever wondered or worried!

When the Holy Ghost is my GPS, I can rest easy and be sure that no matter how badly I get off the direct path, God will guide me back toward my final destination, an eternity with Him. I found this promise particularly soothing to my soul,

I am following the one who made the heavens and the earth. Certainly, if I am His child, I can rely on His directions getting me back on the best path. Yet, I will have to occasionally hear His reminder that I've wandered off course as He guides me on...