Not Your Average Drama Queen

October 22, 2011
Admittedly, my desire for a local recovery group for Adult Children of Hoarders is quite selfish. As I continue to work my own recovery, I find it is possible to move forward without a group, but perhaps not ideal. And so, I often reach out to others who are going through the same things as I am via the internet--blogging, forums, social networking, etc.

Last night I had a short conversation with another adult child who was having a rough evening. The need to express herself was not out of the ordinary, but she needed someone who could listen, validate her right to have the feelings she was having, and encouraging her to work through them instead of reacting badly. Sigh, I only wish that when I was her age I'd had the same opportunity to connect with someone else who had been there and knew the secret world I was continuing to cut ties to! 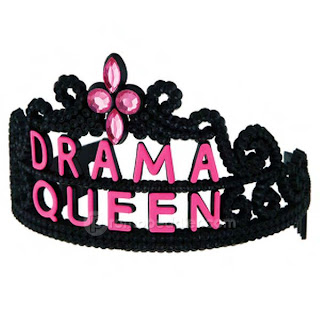 This morning, I continued to ponder my past and what I've come through, where I've come from, and what I still need to work on. I was thinking about the Laundry List of Adult Children of Alcoholics, especially point number eight:

We became addicted to excitement.

I've read in other groups a modified version of this statement that includes fear or excitement. And it took me a while to accept that I was like this.

When I met my husband four and a half years ago, I owned a T-shirt with the message on the front: I DON'T DO DRAMA. How ironic it was that I wore that shirt! Why? Because when my life settled down and became normal, I had a habit of creating drama, self-sabotaging myself and my relationships.

Do I enjoy the stress and anxiety of drama on a regular basis? Honestly, no...but if you looked at how I reacted most of the time to minor issues, you would think that I thrived on it. Okay, honestly, I probably did. But it's only because I was used to drama, stress, crises. Growing up, a day without drama was like a day without the letter A. They were requirements for life!

I don't think I'm alone in this. I think many of us come from families of dysfunction, mental illness or other addictions/compulsions where drama/crises were a normal part of daily life.

I don't like the heart-pounding of anxiety, not knowing how someone else is going to react to any single word I say. I detest it! And yet, when I was brutally honest with myself, I found that I intentionally acted in ways that would propagate drama in my closest relationships. If I'm stripped clear of my walls and look at the deepest, rawest and real part of my heart and being, I have to admit that I was a drama queen for far too long. Sometimes, I still revert those kinds of behaviors when I'm feeling inadequate or nervous, or....

When life is simply going too well!

It's really messed up, I know. When I'm happy and life is going well, I have to open my mouth and pick a fight with someone I love. It's like on some level I crave the adrenaline rush of not knowing how they may respond to what I've said. Or, perhaps it's that the idea from childhood that I don't have a right to a normal, happy, healthy life that spurs me to do really self-defeating things.

Alas, if you've met me...I may not strike you as the drama queen-type (whatever that is!). I try to remain approachable and unassuming. I know I sometimes come off as standoffish, but really, it's just that I am still working through my fear of rejection. But somewhere in my past, not that long ago, I was the Queen of Drama Queens.

I will openly admit to attempting to sabotage every personal relationship I've had. Fortunately, my darling husband meant the "for better or worse" part of the vows. He remains calm and encourages me to talk when I get into this funk. And you know what, when I stop and talk, I realize that the drama isn't what I want. There is an unmet, unspoken expectation I have for others that I simply need to express.

And when I find the strength to cool off and express my needs and expectations, the drama fades away. It isn't necessary; it never really is. See that's the thing I've learned: Even when things go wrong or badly, as they sometimes will, I can react calmly and have a positive result. My problem doesn't have to be blown out of proportion or become the center of everyone's universe for it to turn out in a way that I am happy with.

Oh how I wish I had learned this so long ago! I think of all the stupid things I've done and said because I felt entitled, believed it was necessary, to make mountains out of anthills.

I may not look the part; I'm not your average drama queen, you know...at least, I'm striving not to be a drama queen anymore!

Sidney said…
It's a hard habit to break.

I'm in the midst of it, although the hoarding factor is residual.

It seems lately, that I cannot talk to my COH SO without things erupting into unacceptable-ness. It's all I can do not to engage.
Thinking a lot lately about boundaries...

Ceci,that other COH is very lucky to have a resource like you. Me, too.