March 12, 2011
I just returned from a trip to San Francisco, CA. My purpose for travelling to SanFran was to be a participant in the Mental Health Association of San Francisco's Annual Conference on Hoarding and Cluttering. MHA-SF has been doing this for the last 12 years and has a community-based task force second to none. They are the leaders in reaching out, advocating, and treating those who struggle with stuff.

Initially, I decided to go for my own purposes. As a family member of someone who is clutter-affected, I wanted to go hoping to learn something. As a former participant of the show "Hoarders", I wanted to network with others treating and working with family members. As a human being still in process who decided this was the year to stop being defined by my own fears, I wanted to step out and not wait to be invited.

So I registered for the conference, made flight, hotel, and car arrangements, and contacted CJ Omololu (author of "Dirty Little Secrets" who lives in the Bay Area) to see if we might be able to get together while I was there.

And things I couldn't anticipate happened from there!

During a layover, I received a voicemail from a producer on the show, "Hoarders". She was planning to be at the conference and was scheduled to sit on a panel discussing Hoarding and Cluttering in the Media. Unfortunately, she was advised at the last minute not to fly due to illness and would be unable to attend. She had heard that I was going on my own and wondered if I would be willing to sit on the panel in her place.

I am hardly a producer, but I'm an advocate for the show. I've heard criticism from both sides and actually have been torn myself at times. But overall, I know that the show gave my mother and I a major second chance. Additionally, there are thousands (if not millions) of people who see this show and realize for the first time that their loved one isn't lazy or weird--they have a mental health issue. The shows have put the topic out there for the world to see and discuss. No discussion is a bad one, I say! So I agreed.

It's amazing because one of my fears what that I should step out and speak about my experiences but that I didn't have anything worthy to say or a real platform to do so. The part of me that grew up in dysfunction didn't think I had anything beneficial; I worried I wasn't good enough. I was waiting for someone to ask me to do this. But when I had already stepped out on my own, knowing that I must have something to add because of the experiences I've had, SOMEONE ASKED!

Here's a photo of my experience--the pamphlet from the conference, something from my hotel, and my SPEAKER's badge. There is so much I gained and want to share, but I'll start with this one post. 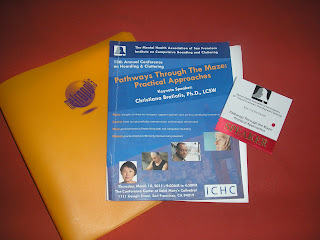 "Hoarders" on A and E hoarding